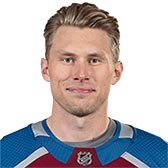 13 year National Hockey League veteran for the Colorado Avalanche. A native of Bloomington, MN, Erik won a silver medal for Team USA at the 2010 Olympic Games in Vancouver, BC. In 2015, he was named to his ﬁrst NHL All-Star game. In 2020, he became the 37th US born defenseman ever to reach 300 NHL points.

Erik got involved in Thoroughbred racing in 2016, and has campaigned under his ERJ Racing banner multiple Grade 1 winner Bowies Hero, along with graded stakes winners Comical, Shane’s Girlfriend, Munny Spunt and Lazy Daisy. A long supporter of Thoroughbred aftercare and TCA, Erik looks forward to a lasting relationship with the TCA for years to come.