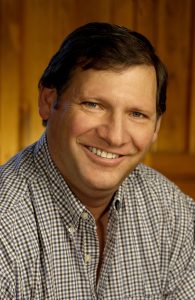 Dan Rosenberg fell in love with horses when he was 9 years old and badgered his father to buy him a horse when he was 12. Showing Hunters, Jumpers, and Equitation through high school he knew he wanted to have a career working with horses. Because it was the world he knew, he worked one year as a groom in a show barn in Oakland, California and a year as a groom in Weston, Connecticut before moving to Maryland to work at Glade Valley Farm in Frederick. Loving the work on a Thoroughbred breeding farm, he decided to further his career in Kentucky.

After three years as a groom at Clovelly Farm, he was hired as Assistant Manager at Calumet Farm in charge of all the mares and stallions. In 1978 he was hired by Robert Clay to manage the recently established Three Chimneys Farm which consisted of 120 acres and 20 mares, and the recently acquired Kenirey Stud in partnership with Tim Rogers who owned Airlie Stud in Ireland. From his initial interview with Robert Clay, the plan was to grow the farm into a world class full service boarding, breeding, sales agency, and stallion station. Over time the farm achieved that goal and grew to 2000 acres with 400 mares, a leading consignor, and up to twelve stallions starting with Slew O’ Gold, and Chief’s Crown and then over time Seattle Slew, Silver Charm, Smarty Jones, Dynaformer, Wild Again, and Rahy among others. He stepped down from that position in January of 2008 to form Rosenberg Thoroughbred Consulting.

Dan is Past-President of the Kentucky Thoroughbred Farm Manager’s Club and was named by them as Farm Manager of the Year. He is currently a Director of the Equine Land Conservation Resource, serves on the Midway University Equine Advisory Council, is President of the Pisgah Community Historic Association, and is the Chair of the Woodford Forward Foundation. He is a former Director of and Past-President of Thoroughbred Charities of America, and has served on the Equine Studies Advisory Boards of the University of Kentucky, Colorado State University, and Texas A&M, served as Director in Residence at the University of Kentucky Equine Initiative, is a former Board Member of the Gluck Equine Research Foundation, and a former member of the Colorado State University Orthopedic Research Advisory Board. He was received the “Ambassador of Racing” award from the National Association of Turf Writers in 1994.