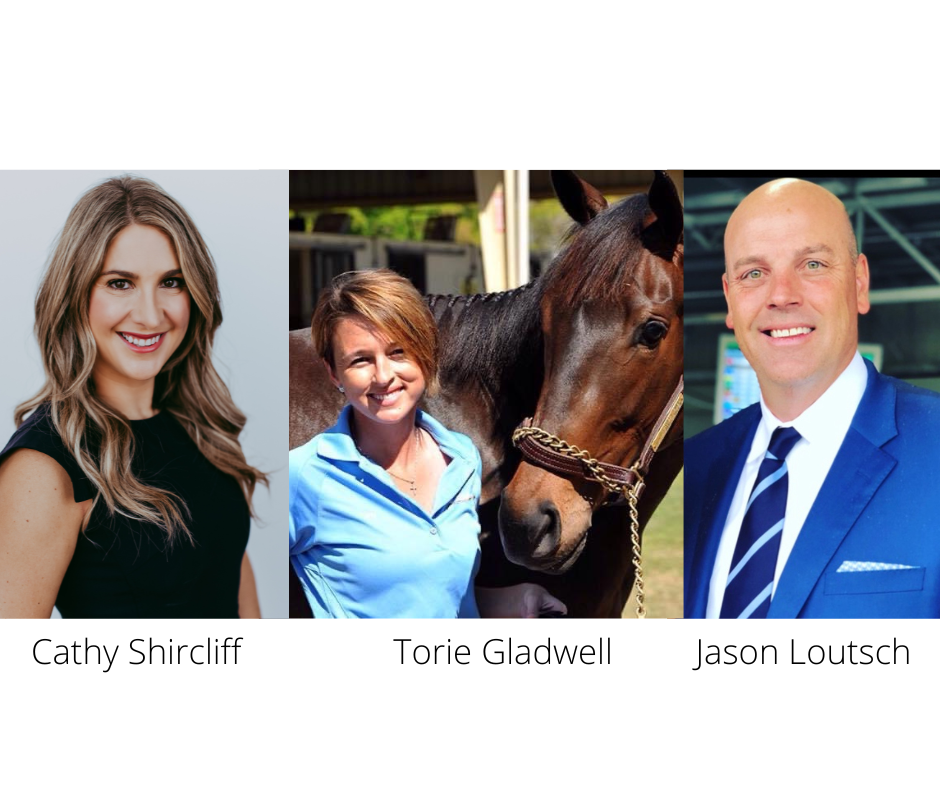 TCA announced today the appointment of Torie Gladwell, Jason Loutsch, and Cathy Shircliff to its Board of Directors.

“We are thrilled that Torie, Jason, and Cathy have joined our board and I look forward to working with them,” said Mike McMahon president of TCA. “They each bring unique skill sets, new ideas, and most importantly, a passion for TCA’s mission. The TCA board is committed to working hard to raise money for the benefit of the approved organizations that support Thoroughbred aftercare as well as the people working on the backstretches and farms.”

Torie Gladwell was raised in a small town in Missouri where she grew up showing Arabians. She always knew she wanted to pursue a career in the equine industry and, after graduating from college, she began working at the Thoroughbred sales for various consignors. She later relocated to Florida where she and husband James Gladwell IV operate Top Line Sales, LLC as well as their training farm, Exclusive Equine Investments. Notable graduates include Princess Noor, No Parole, and Core Beliefs. The Gladwells also maintain a broodmare operation with mares in Florida, New York, and Kentucky.

Jason Loutsch is the owner and racing manager of Albaugh Family Stables. He has been involved in breeding and racing since 2004 when he bought Miss Macy Sue, the dam of Liam’s Map and Not This Time. Albaugh Family Stables has found great success on the track with their five Kentucky Derby starters: Paddy O’ Prado, J Boys Echo, Free Drop Billy, Brody’s Cause, and Thousand Words. Loutsch and his wife, Tiffany, reside in Iowa with their two daughters.

Cathy Shircliff grew up in Louisville, Kentucky spending much of her childhood tagging along with her horse owner dad to races. She holds a B.S. from Georgetown University and a master’s degree from the University of Louisville. In 2019 Cathy accepted the role of Director of Community Relations for Churchill Downs Incorporated, a position she still holds. In this role, Cathy has been active in increasing CDI’s footprint in Thoroughbred aftercare including facilitating the opening of Thoroughbred Retirement Foundation’s farm at Chestnut Hall and Second Stride’s expansion to Chorleywood Farm. In 2021, she adopted one of the horses that her family invested in, 2014 Triple Crown runner General A Rod.

Thoroughbred Charities of America (TCA) was formed in 1990 to raise and distribute funds to charities in the Thoroughbred industry that fund and facilitate the support of Thoroughbreds and the people who care for them. In 2022, TCA granted over $783,000 to 74 charities working within Thoroughbred retraining, rehoming and retirement; backstretch and farm worker services, research and equine-assisted therapy. Over the last 32 years, TCA has granted more than $26 million to more than 200 charities that successfully meet the criteria set forth in its annual grant application. TCA also administers the Horses First Fund, founded by LNJ Foxwoods in 2016, to assist Thoroughbreds in need of emergency aid. TCA is the charitable arm of the Thoroughbred Owner and Breeders Association (TOBA).