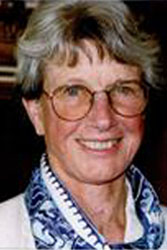 Gretchen was born in Philadelphia, Pennsylvania and attended the University of Pennsylvania and Neumann College. She began riding at age three and fox hunted mainly with Huntingdon Valley as a child, and then Pickering, Radnor and Andrews Bridge. She became involved with race horses as an adjunct to the hunters and managed the farm and broke yearlings, did lay-ups and foaling until 1995. She and her husband Roy own Lael Stable and have been breeding Thoroughbreds since 1978.