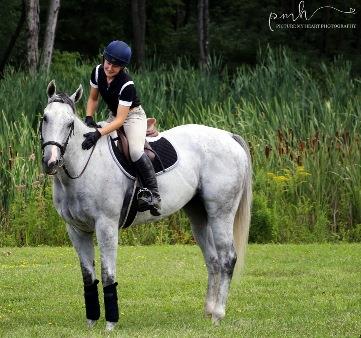 Founded in 1996 as an extension of the Kentucky Humane Society, ReRun, Inc., is a Thoroughbred rehabilitation, retraining, and rehoming organization now located in New York. Executive Director Lisa Molloy has been with the organization since 2012 and has seen significant growth over the last couple of years.

“Adoption applications are up more than 50% and adoptions have increased about 20% from last year,” said Molloy. She noted that the intake of horses has also increased by 30% in 2016. ReRun obtains horses from several different sources but the majority come from New York’s Take the Lead program as well as many New York-based owners and trainers.

Currently, ReRun houses about 30-35 horses at their facility in East Greenbush, New York including the 2007 New York Turf Male Horse of the Year, Dave. Aside from a few horses that are in permanent sanctuary and five to eight horses that are undergoing rehabilitation, most of ReRun’s residents are in retraining. Since no two horses are alike, ReRun trainers work to evaluate each horse’s strengths and weaknesses while determining the discipline in which they would be best suited.

“We aren’t reinventing the wheel,” said Molloy. “Since the horses are broken and have been ridden we just need to teach them new skills. We work with our horses to teach them how to walk, trot, and canter, jump cross-rails, and trail ride alone and in company.” It is estimated that each horse receives about six weeks of retraining before being rehomed.

According to Molloy, ReRun is unique to many other aftercare organizations because the majority of their staff has worked on the racetrack. This experience provides for a clearer understanding of the training that the horses received while on the track and can be helpful as horses are taught new skills. “We feel that being familiar with the training techniques used on the racetrack is an advantage because we can more readily teach or un-teach certain habits or behaviors,” said Molloy.

Not only has Molloy’s racetrack experience assisted her with the horses in her care but it has given her the perspective that drives her to continue in Thoroughbred aftercare. “I started working on the racetrack at 18; someone gave me a chance and gave me opportunities. By the same virtue, I want to do that for the horses. They should have the chance to have a second career once their racing days are over,” she said.

TCA’s grants to ReRun often provide for diagnostic work to be performed on horses. Molloy believes that this is important because it allows for the root cause of problems to be identified and potentially fixed, which, in turn, will allow for an increased likelihood of a successful adoption. TCA’s grants have also provided for rehabilitation opportunities including the construction of a paddock specifically for horses recovering from injuries.

TCA proudly supports ReRun and numerous other qualified nonprofit organizations working to uphold our mission of providing a better life for Thoroughbreds, both during and after their racing careers, by supporting qualified repurposing and retirement organizations and by helping the people who care for them.